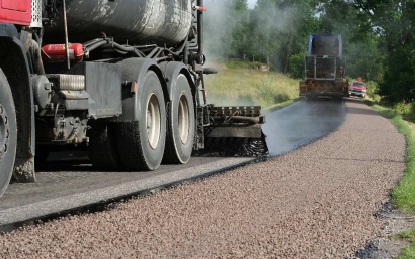 Bitumen Emulsions have being developed and exponentially increased sinned they were created in 1900. Estimated presently at 20% of the global bitumen use, bitumen emulsions are basically an O/W – Oil on Water solution – A dispersion of bitumen particles on water, stabilized with the of surfactants – Surface active agents – or most commonly known as emulsifiers, that will permit the bitumen to diluted in water. They are primarily used for tack coats for use in between hot mix asphalt layers and prime coats for thin hot mix surfacing layers or a chip seal pavements.

The main grades for bitumen emulsions are classified as follows:

Bitumen Emulsion is an area where technological progress is still being made to meet the requirements of pavement engineering. Anionic emulsions were first developed. They are currently less favored than the cationic emulsions, as cationic emulsions coat the aggregates more efficiently due to their positive load and have therefore better adhesion properties. Cationic Emulsion is both more favored and more widely used.

Bitumen emulsions are complicated and good chemistry is required to reach target desired emulsion properties. Variables in emulsion production include the base bitumen and the type and amount of emulsifying agent. There are two basic classifications of emulsions globally usually used, anionic bitumen emulsions and cationic bitumen emulsions. The type (chemistry) of the emulsifying agent used, determines the designation. Emulsifying agents are the chemicals used to stabilize the emulsion and keep the “billions and billions” of bitumen drops separated from one another. These compounds are large organic molecules that have two distinct parts to them. These parts are called the “head” and “tail.” The “head” portion consists of a group of atoms that chemically have positive and negative charge areas. These two charged areas give rise to the head being called polar (as in poles of a magnet). Because of this polarity, and the nature of some of the atoms in this polar head, the head is soluble in water. The tail consists of a long chain organic group that is not soluble in but is soluble in other organic materials like oils (bitumen). Thus, an emulsifying agent is one molecule with both water-soluble and portions. This unique characteristic gives the chemical its emulsifying ability.

The term anionic is derived from the migration of particles of bitumen under an electric field. The droplets migrate toward the anode (positive electrode), and hence the emulsion is called anionic. In an anionic emulsion, there are “billions and billions” of bitumen droplets with agent at the water bitumen interface. The tail portion of the emulsifying agent aligns itself in the bitumen while the positive portion of the head floats around in the water leaving the rest of the head negatively charged and at the surface of the droplet. This imparts a negative charge to all the droplets. Since negatives repel each other, all the droplets repel each other and remain as distinct bitumen drops in suspension. A typical anionic emulsifying agent is shown below along with a diagram showing the orientation of the agent at the bitumen-water interface and the negative charge imparted to each drop.