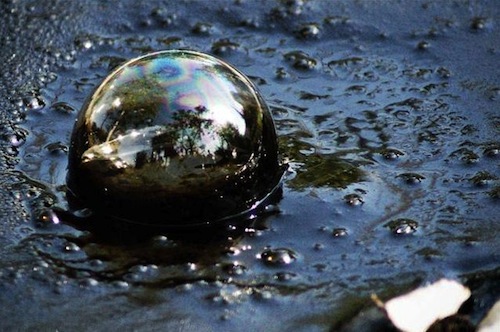 Cutback bitumen
Bitumen is a viscoelastic mix of hydrocarbons used to hold together aggregates in pavements. It is a highly viscous waterproof adhesive at ambient temperatures.Bitumen is generally sourced as a fraction from the distillation of crude oil, but may also be found in natural deposits. One way to use bitumen in road pavements is to spray the bitumen at elevated temperatures onto the road pavement substrate and then to apply stone chips (generally single sized aggregates) to thebitumen surface. This is variously known as bitumen spray sealing, bitumen seal coating, chip sealing or surface dressing. This can be contrasted with hot-mix or asphaltic concrete applications where bitumen and the aggregate are mixed together and then applied to a substrate. In cold-mix (or plant-mix) applications highly cutback bitumen and aggregate are mixed together at ambient temperatures and then applied to a substrate. In many countries kerosene and other volatile petroleum derived products are added as a cutter or cutback agent to bitumen to reduce (or cutback) the viscosity of the bitumen. The mixture obtained may be called cutback bitumen.

Cutback asphalt
The reduction in viscosity of the bitumen aids the construction of seal coats in road pavements as the softened mixture wets the chips more easily. The cutback agent evaporates from the seal coat, the cutback agent becoming a negligible component of the seal coat a few months after application. If significant amounts of the cutback agent remain in the seal coat an unwanted long term softening effect may result.Cutback agents are also used to lower the viscosity of bitumen when it is applied as a primer to the surface of a road pavement aggregate base course or substrate. The primer penetrates into the surface of the base course and provides a more bitumen friendly surface. Improved adhesion to the base course of a subsequently applied seal coat or hot mix is obtained. The primer may also serve to assist in waterproofing the base course layer.

Cutback bitumen agent
In order to address these disadvantages of conventional bitumen cutback agents, it is possible to use bitumen-water emulsions. After spray- application to the substrate the emulsion breaks and the water evaporates or runs off the surface. However, this process happens slowly (especially in cold weather or in shaded areas) and the applied bitumen emulsion is vulnerable to wet weather until the emulsion has broken.